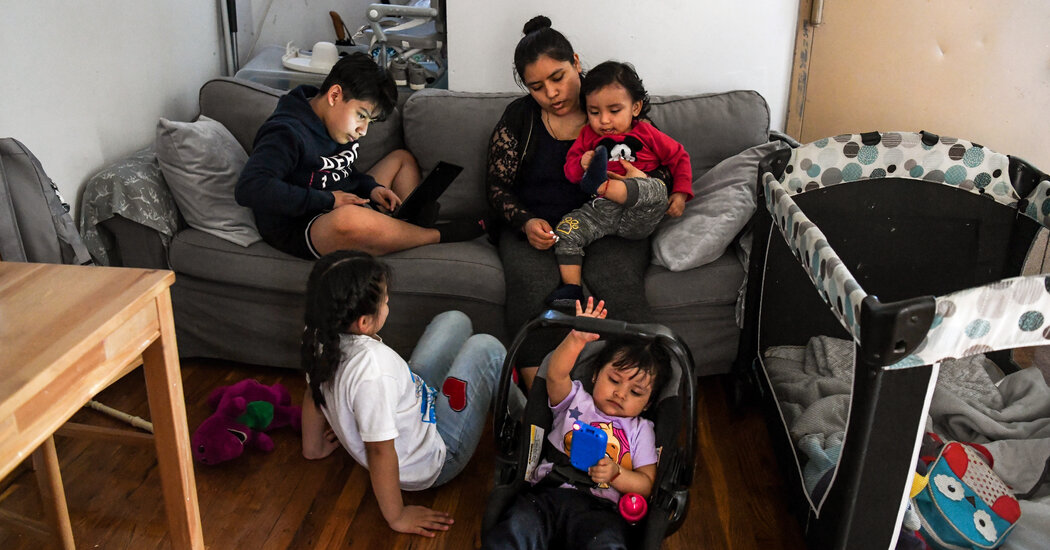 Ms. Galán’s home is small, but happy. Christopher, 11, Mia, 7, and Ian, 1, get along. The older children help keep the space tidy. The youngest has kept them giggling during the long year they’ve spent together indoors.

Before the pandemic, Ms. Galán worked at a dry cleaner in the Bronx, earning about $350 per week, which helped support her children and even her mother in Puebla, Mexico.
But last March, as Ms. Galán was preparing to return to work after maternity leave, the dry cleaner shuttered its doors as the city went quiet.

Ms. Galán is the oldest of five sisters. Her formal education in Puebla ended after elementary school. Her father was an alcoholic, and her mother needed her to watch her sisters while she went to work, she said. “My mother was the father, and I was the mother.”
Those skills have helped her run her own household, she said.
But the arrival of the pandemic shook Ms. Galán and her family in unexpected ways. Unemployed and stuck indoors as the virus spread last spring, she and her partner, Ian’s father, began to argue, she said. When the arguments escalated, she took her children to a shelter.

In January, after six months at the shelter, she and her children returned home to the old apartment. Ms. Galán was grateful: All over New York City, undocumented people have struggled to endure the economic toll of the pandemic, losing not just jobs but housing.
But with Ian’s father gone, Ms. Galán knew she would have to figure out a way to support her family on her own.

The school meals — and a weekly hot meal from an organization — have helped her spend only about $40 a week on groceries, she said, which goes to items like eggs, vegetables, pasta, beans, rice and cooking oil. Another local organization has given her diapers and feminine hygiene products.

Ms. Galán reserves most of what remains of her $100 weekly budget for the gas, electric and internet and phone bills.
Her children’s tablets, issued to them by their school, come equipped with internet, but it is spotty, she said, so she has had to pay a provider. When she has not been able to cover her phone bill, a sister has helped.

“But it’s not enough,” she said, and any unexpected expense can feel like a crisis.
When Mia’s teacher said the girl needed a desk and a chair last year, while in the shelter, Ms. Galán could not afford them. “I couldn’t tell the teacher,” she said. “It’s hard not being able to provide what they say the children need.”

All year long, she has attended remote English classes on her smartphone four days a week, for two hours each evening, hoping her growing fluency will help her get a steady job and pass an exam for a high-school equivalency diploma.
“The kids are students in the day, and I’m a student at night,” she said.

Before the pandemic, Ms. Galán sent her mother a few hundred dollars every month for food or bus fare, she said. Now, all she can do is pray.
“It drives me crazy a little bit, not being able to help her,” she said.

She tries not to let the children see her crying.

The Faces of Mothers Who Bore the Burden of the Pandemic
Lordstown Motors halves the number of vehicles it will make in 2021.
To Top
Top