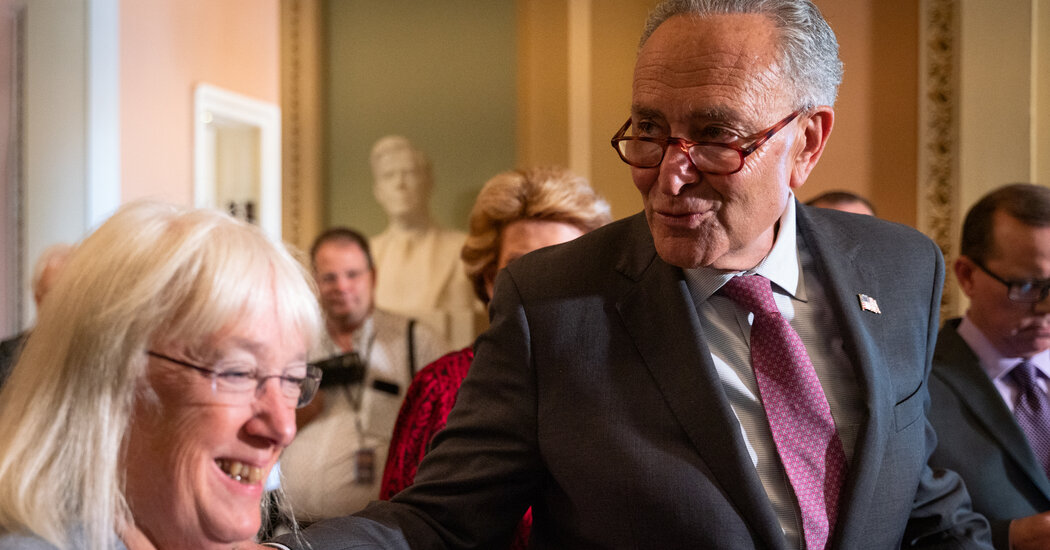 WASHINGTON — Top Democrats announced on Tuesday evening that they had reached agreement on an expansive $3.5 trillion budget blueprint, including plans to pour money into addressing climate change and expanding Medicare among an array of other Democratic priorities, that they plan to advance alongside a bipartisan infrastructure deal.Combined with nearly $600 billion in new spending on physical infrastructure contained in the bipartisan plan, which omits many of Democrats’ highest ambitions, the measure is intended to deliver on President Biden’s $4 trillion economic proposal. The budget blueprint, expected to be dominated by spending, tax increases and programs that Republicans oppose, would pave the way for a Democrats-only bill that leaders plan to push through Congress using a process known as reconciliation, which shields it from a filibuster.To push the package — and the reconciliation bill that follows — through the evenly divided Senate, Democrats will have to hold together every member of their party and the independents aligned with them over what promises to be unified Republican opposition. It was not clear if all 50 lawmakers in the Democratic caucus had signed off the blueprint, which is considerably smaller than the $6 trillion some progressives had proposed but larger than some moderates had envisioned.Mr. Biden was set to attend lunch on Wednesday with Democrats, his first in-person lunch with the caucus since taking office, to rally the party around the plan and kick off the effort to turn it into a transformative liberal package. The blueprint, and subsequent bill, will also have to clear the House, where Democrats hold a razor-thin margin.The agreement, reached among Senator Chuck Schumer of New York, the majority leader, and the 11 senators who caucus with the Democrats on the Budget Committee, came after a second consecutive day of meetings that stretched late into the evening. Louisa Terrell, Mr. Biden’s head of legislative affairs, and Brian Deese, his National Economic Council director, were also present for the meeting.“We are very proud of this plan,” Mr. Schumer said, emerging from the session flanked by the other Democrats in the corridor outside his office just off the Senate floor. “We know we have a long road to go. We’re going to get this done for the sake of making average Americans’ lives a whole lot better.”Senator Bernie Sanders of Vermont, the liberal chairman of the Budget Committee, and Senator Mark Warner of Virginia, a key moderate who is negotiating the details of the bipartisan framework, also confirmed their support for the agreement, in impassioned remarks.“This is, in our view, a pivotal moment in American history,” proclaimed Mr. Sanders, who had initially called for a package as large as $6 trillion.Details about the outline were sparse on Tuesday evening, as many of the specifics of the legislative package will be hammered out after the blueprint is adopted. Mr. Warner said the plan would be fully paid for, though Democrats did not offer specifics about how they planned to do so.“I make no illusions how challenging this is going to be,” said Mr. Warner, who made a point of thanking both the committee and the bipartisan group he had been negotiating with. “I can’t think of a more meaningful effort that we’re taking on than what we’re doing right now.”Updated July 13, 2021, 8:18 p.m. ETThe resolution is expected to include language prohibiting tax increases on small businesses and people making less than $400,000, according to a Democratic aide familiar with the accord, who disclosed details on the condition of anonymity. Mr. Schumer said the resolution would call for an expansion of Medicare to provide money for dental, vision and hearing benefits.Democrats will now have to hammer out the terms of the budget resolution and the bipartisan infrastructure deal, which Mr. Schumer has said he hopes to pass in the Senate before the chamber leaves for the August recess. Once the resolution is passed, the caucus will then draft the legislative package, which will fund and detail their ambitious proposals — and most likely impose hefty tax increases on the rich and on corporations to pay for them.Even before the agreement was reached, committees had quietly been working on a series of proposals for the bill and discussing how to keep the bill within the confines of the strict rules that govern the reconciliation process.The Senate Finance Committee had been drafting tax provisions to help pay for the spending. They include a restructuring the international business tax code to tax overseas profits more heavily in an effort to discourage U.S. corporations from moving profits abroad. They would also collapse dozens of tax benefits aimed at energy companies — especially oil and gas firms — into three categories focused on renewable energy sources and energy efficiency.Finance Committee Democrats will now turn their attention to the individual side of the tax code, where they want to raise taxes on large inheritances and raise capital gains tax rates on the richest Americans.On the spending side, Mr. Biden, working with Mr. Sanders, wants to make prekindergarten access universal and two years of community college free to all Americans. Money is expected to be devoted to a series of climate provisions, after liberal Democrats warned that they would not support the bipartisan framework without the promise of further climate action.Ultimately, that money, combined with funds already approved in Mr. Biden’s pandemic relief law and the pending infrastructure plan, could be transformative, steering government largess toward poor and middle-class families in amounts not seen since the New Deal.Jonathan Weisman contributed reporting.