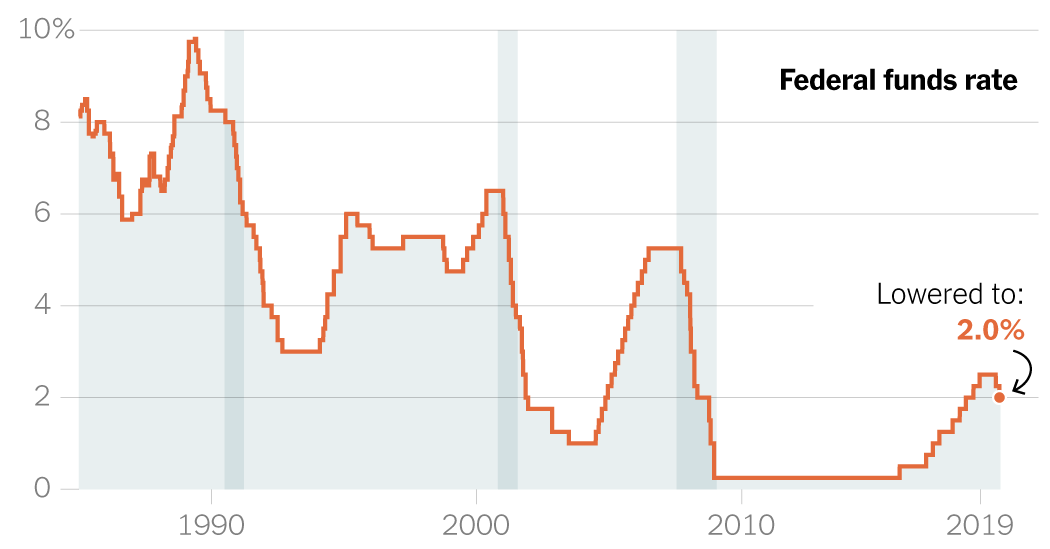 The Fed began
raising rates at
the end of 2015

The Fed began raising
rates at the end of 2015

The Federal Reserve on Wednesday lowered interest rates for the second time this year, as it tries to guard the United States economy against trade-related uncertainty and slowing global growth. The central bank cut borrowing rates in late July for the first time since the financial crisis.

The moves are part of an effort to keep borrowing cheap, credit widely available and businesses and consumers confident.

Longer-term bonds have been trading at interest rates that are lower than those on short-term securities — what is known as the yield curve inverting. It’s an unusual occurrence that often happens before recessions, and one that could signal that investors have become pessimistic about the economic outlook.

The global economy is slowing as manufacturing activity weakens, and political tensions, including President Trump’s trade war with China, are creating uncertainty for businesses. That is slowing down investment, which could hold back growth.

The Fed keeps a close eye on how fast the economy is expanding because the pace of growth is crucial to its two main goals: reaching maximum employment and maintaining stable inflation around 2 percent. A slowdown could prevent policymakers from hitting their long-elusive inflation goal, and a downturn might lead to higher unemployment.

For now, consumers are powering the economy ahead. Unemployment is low, wages are rising and households are spending. But surveys in recent months have shown consumer sentiment may be wavering, a cause for concern if it bleeds into real-life behavior. Consumers fuel about 70 percent of the economy.

Rates are being lowered around the world

The United States is in a comparatively strong position compared with other large economic powers: China’s economy has already begun to slow, Japan is nowhere near hitting its inflation target despite negative interest rates and Europe is showing cracks as Germany teeters on the brink of a recession.

Against that backdrop, countries around the world have been cutting borrowing costs. Last week, the European Central Bank cut one of its policy rates to a record low and rolled out a broader package of monetary stimulus.

After the Fed’s move on Wednesday, the focus will quickly turn to whether Fed officials will continue cutting rates before the year’s end, or if this move will be enough to keep the American economy humming along.

Based on economic projections released by the Fed on Wednesday, a growing number of officials expect one more reduction this year — in-line with investor and economist expectations.

Trump and California See Same Homeless Problem, but Not the Same Solutions
Fed Cuts Interest Rates by Another Quarter Point
To Top
Top