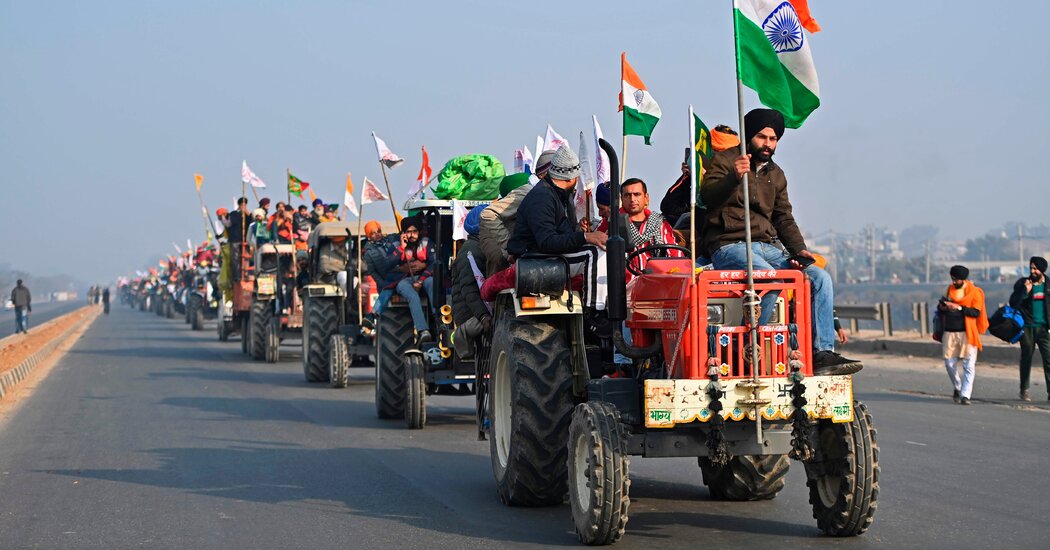 At least one protester was killed and 300 police officers were injured after tens of thousands of farmers, many driving tractors, took to the streets of New Delhi on Tuesday to call for the repeal of contentious new agriculture laws.After months of sustained but peaceful demonstrations on the city’s outskirts, the farmers upstaged the city’s national Republic Day holiday, clashing with the police, destroying barricades and storming the Red Fort, a 400-year-old landmark. In addition to the police officers, many protesters were injured as well.On Wednesday, the day after the chaos, the farmers returned to their camps on the city’s edge, pledging to continue their movement but canceling plans for a march on foot to India’s Parliament that had been set for Monday.Who are the protesters?Many of the protesting farmers are members of the Sikh religious minority and come from the states of Punjab and Haryana. Farmers in other parts of the country have held rallies in solidarity.Since November, thousands of farmers have encamped outside New Delhi, the capital, keeping vigil in sprawling tent cities and threatening to enter if the farm laws were not repealed.The protest has laid bare the dire reality of inequality across much of the country.More than 60 percent of India’s 1.3 billion people still depend primarily on agriculture for their livelihood, though the sector accounts for only about 15 percent of the country’s economic output. Their reliance has only increased after the coronavirus pandemic badly struck the urban economy and sent millions of laborers back to their villages. For years, debts and bankruptcies have been driving farmers to high rates of suicide.What do they want?The protesters are challenging Prime Minister Narendra Modi over his efforts to reshape farming in India.The demonstrators are demanding that Mr. Modi repeal recent farming laws that would minimize the government’s role in agriculture and open more space for private investors. The government says the new laws would unshackle farmers and private investment, bringing growth. But farmers are skeptical, fearing that the removal of state protections that they already consider insufficient would leave them at the mercy of greedy corporations.Government support for farmers, which included guaranteed minimum prices for certain essential crops, helped India move past the hunger crisis of the 1960s. But with India liberalizing its economy in recent decades, Mr. Modi — who wants the country’s economy to nearly double by 2024 — sees such a large role for the government as no longer sustainable.Farmers, however, contend that they are struggling even with the existing protections. They say that market-friendly laws will eventually eliminate regulatory support and leave them bereft, with the weakened economy offering little chance of a different livelihood.How did the violence erupt?Thousands of protesting farmers poured into New Delhi on Tuesday in what had been expected to be a peaceful protest during holiday celebrations and a military parade overseen by the prime minister.Some farmers broke with the main march and used tractors to dismantle police barricades. Many farmers carried long swords, tridents, sharp daggers and battle axes — functional if largely ceremonial weapons. Most protesters did not seem to be wearing masks despite the Covid-19 outbreak in India.Police commanders deployed officers carrying assault rifles. They stood in the middle of main roads, tear gas swirling around them with their rifles aimed at the crowds. In some areas, video footage showed, the police beat protesters with their batons to push them back.The farmers claim the violence was stoked by the government and outside elements in an effort to derail their months of peaceful protest.The farmers waved flags and taunted officers. They also breached the Red Fort, the iconic palace that once served as the residence of the Mughal rulers of India, and hoisted atop the ramparts a flag that is often flown on Sikh temples.Local television channels showed farmers placing the body of a protester in the middle of a road. They claimed the man had been shot, but the police said he had died when his tractor overturned.The Indian government temporarily suspended internet services across the areas that have been hubs of protest for months, an official at the Home Affairs Ministry confirmed.