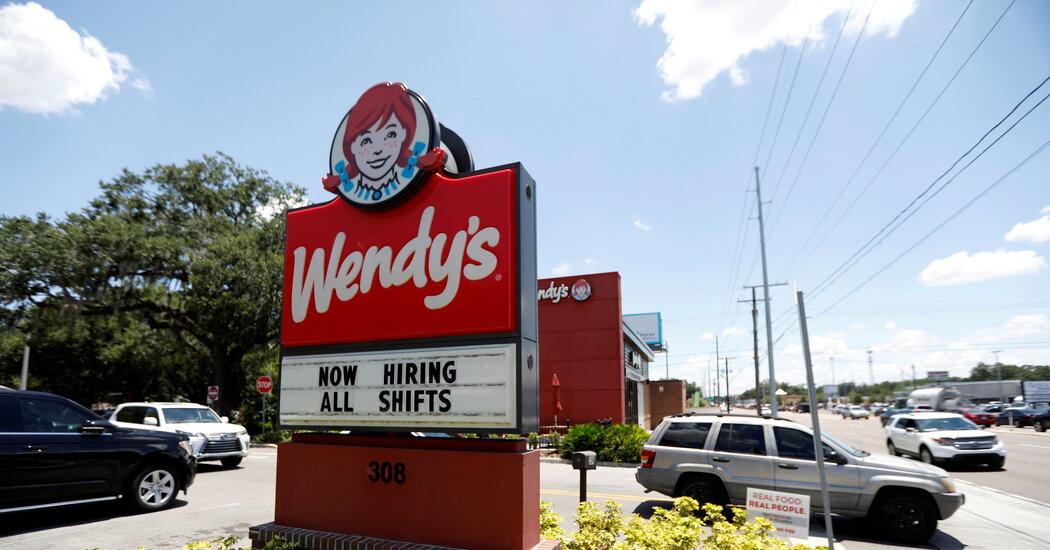 Wages continued to grow briskly in August even as hiring decelerated, a surprising development that economists said was probably driven partly by continuing demand for workers in spite of coronavirus outbreaks caused by the Delta variant.Average hourly earnings climbed by 0.6 percent from July to August, more than the 0.3 percent that economists in a Bloomberg survey had forecast. Over the past year, they were up 4.3 percent, exceeding the expected 3.9 percent.Wage gains have been hard to read during the pandemic because they have been affected by what economists call “composition effects”: Virus layoffs and unusual rehiring patterns have shaken up who is working, and when higher-paid workers make up a bigger share of the pool, it can deceptively look as if average pay rates are climbing. Such quirks have been less pronounced in recent months, but changes in the labor force as the virus surged in August probably drove some of the apparent disconnect between compensation and hiring.“A month with no net job gains in the low-paid leisure and hospitality sector will see a bigger increase in average hourly earnings than a month with more even payroll growth,” Ian Shepherdson, the chief economist at Pantheon Macroeconomics, wrote in an research note after the release.Pay has been climbing strongly in recent months as job openings have exceeded the number of people actively looking for work. Michael Feroli, the chief U.S. economist at J.P. Morgan, suggested that strong unmet demand for workers may have contributed to especially strong wage gains at restaurants and hotels last month — but that it wasn’t a simple story.“It is possible that firms are having a hard time finding workers in this low-wage sector,” Mr. Feroli wrote, noting that the 1.3 percent average hourly earnings increase for leisure and hospitality employees over the past month was rapid compared to that seen in other sectors. At the same time, “aggregate hours in the sector declined for the first time this year in August, suggesting that the spread of the Delta variant may be limiting demand for labor.”It is unclear whether the wage pressures will last as workers return to the labor market. While it is hard to gauge how much enhanced unemployment benefits discouraged workers from taking jobs, and early evidence suggests that the effect was limited, a few companies have signaled that labor supply has been improving somewhat as benefits were cut off early in some states. Plus, other trends — the end of summer and the resumption of in-person school and day care — may allow parents and other would-be workers who have been on the sidelines to return to the jobs search.“As those states rolled off the enhanced unemployment benefits, what we did see was an initial nice pickup in applicant flow and staffing,” Jeff Owen, the chief operating officer at Dollar General, said in a recent earnings call. “The good news now is we’re seeing that across the system, and so it’s hard to discern that impact now because everything is up.”If many people do begin to look for work in the coming months, helping the stagnating labor force participation rate to rebound, it could keep wages from rising as strongly because employers will have to compete less to attract talent.Higher pay can feed into higher inflation, but many economists pointed out that today’s rapid wage growth is unlikely to worry the Federal Reserve — which is in charge of keeping price gains under control — when productivity seems to be improving.If so-called “unit labor costs” remain under wraps, meaning that it isn’t costing companies too much more to hire labor to produce the same amount of output, that should prevent painfully higher wage bills for businesses that could feed into persistently higher consumer prices. Jerome H. Powell, the Fed chair, referred to that consideration in a footnote to a major speech last week.“If wage increases were to move materially and persistently above the levels of productivity gains and inflation, businesses would likely pass those increases on to customers,” Mr. Powell said. “Today we see little evidence of wage increases that might threaten excessive inflation.”

The August jobs report is coming. Here’s what to expect.
When Heat Waves, Wildfires and Drought Grip Oregon and Washington
To Top