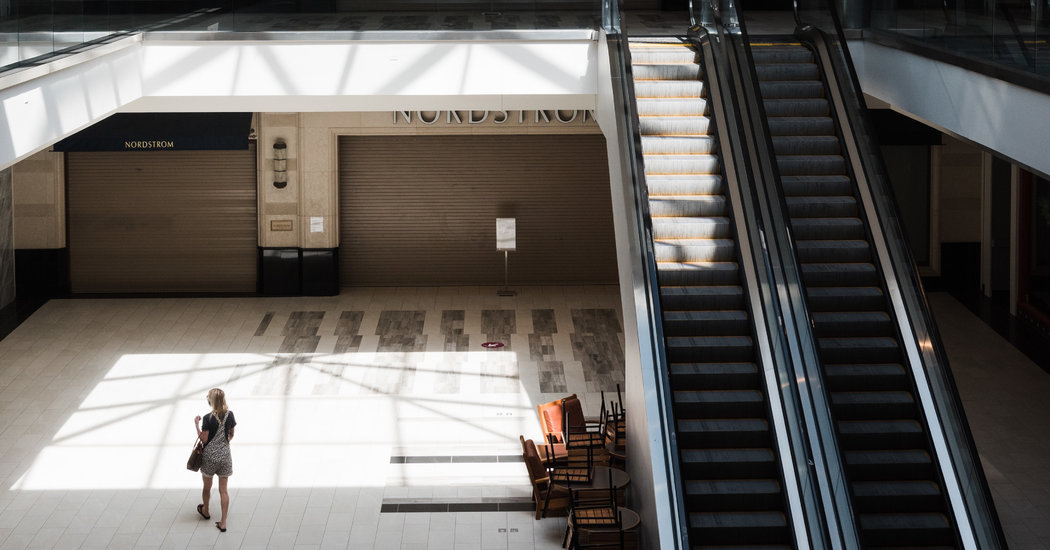 Even as emergency government aid gave incomes a boost in April, coronavirus lockdowns caused Americans to shut their wallets, prompting the biggest monthly drop in consumer spending on record.Personal income rose 10.5 percent, lifted by nearly $3 trillion in government transfer payments, mostly in the form of $1,200 checks that millions of households received from the federal government. But with stores closed and most Americans under stay-at-home orders, there wasn’t much opportunity to put that money to work, causing consumption to fall by 13.6 percent.That combination of a cash infusion and nowhere to spend it caused the savings rate to soar to 33 percent, up 12.7 percent from March and the highest level since the government began tracking the information in 1959.The data, reported Friday by the Commerce Department, is further evidence of an economy at a virtual standstill last month. There are preliminary signs that conditions have moderated since then, but the pain continues for many Americans. On Thursday, the Labor Department reported that 2.1 million more workers filed for unemployment insurance last week, bringing the total since mid-March to more than 40 million.Given the plunge in consumer spending, which accounts for more than two-thirds of economic activity, many economists expect a drop of 40 percent or more in gross domestic product in the second quarter. Unemployment is already in double-digits, and each report seems to bring data unimaginable a few months ago.“The numbers were wild,” Gregory Daco, chief U.S. economist at Oxford Economics, said of Friday’s report. “It’s not every year you get these kinds of crazy swings. It requires a bit of coolheadedness to understand what is transitory and what is permanent.”Government payments, which pumped up personal income, he said, “are a one-time shot. If you take these benefits out, then you are left with a massive loss of income.”The $1,200 federal checks made the biggest difference last month, but the government’s $600 in additional weekly unemployment benefits has been significant, too. That supplement to state payments is set to expire in late July.Lingering fear is likely to restrain spending on social activities and discretionary items for a while. There are signs that spending has rebounded slightly in May, Mr. Daco said, but there is a long way to go before activity returns to precrisis levels.“You might see strong growth numbers on spending, but we’re coming out of a deep hole,” he said.The rise in personal income shows how critical the huge stimulus package passed in March was as the pandemic devastated private-sector jobs. Without it, the economic damage would have been even worse, experts say.“This is an unambiguous triumph of countercyclical government spending, which will save the U.S. economy a heap of trouble in the medium to long term,” said Troy Ludtka of Natixis CIB Americas, a corporate and investment banking firm. “If the private sector retrenches, government needs to pick up the slack. This is exactly what data for the month of April depicts.”April represents the deepest point of the current economic downturn, said Michael Gapen, chief U.S. economist at Barclays. “The personal spending data was much weaker than we anticipated, and it spread across virtually all major categories,” he said.But there were reasons for optimism in the report, namely in the income and savings data, he said.“The potential good news is that there’s a large pool of savings that consumers can draw on to support spending as states reopen,” he said. “April should be the trough, and we expect May and June to look better, setting the economy up for a decent rebound in the second half of the year.”In a separate report Friday, the University of Michigan reported that its gauge of consumer sentiment ticked up to 72.3 in May from 71.8 in April. The measure remains 20 points below its 12-month average.“The fact that sentiment stabilized is encouraging,” Mr. Daco said. “But once the stimulus from the federal government fades out, we will be left with depressed incomes. This is a large amount of money for many people.”Allie Radice is one of the unlikely savers who has benefited from federal payments but worries about how long they will last. She successfully applied for unemployment insurance after her work as a dancer as well as a server in the catering industry in Manhattan dried up in March.With the $600 extra weekly benefit from the federal government factored in, her unemployment payments exceed what she earned in shows and catering. She received the $1,200 federal stimulus payment as well.But she has been holding off on big purchases. She spent some of the $1,200 on rent and banked the rest. Now Ms. Radice is saving in case the government doesn’t extend the $600 weekly payments beyond late July, when they are set to expire.She has limited her acquisitions to dance supplies: pointe shoes, a ballet barre and vinyl flooring. “I don’t feel the need to spend,” she said. “There’s nowhere to go out or any reason to get dressed up.”In the meantime, Ms. Radice, 32, is taking online dance classes and voice lessons. “I intend to keep working on my craft,” she said. “I’m still paying rent, but there is unemployment for that. If I didn’t have that unemployment insurance, I’d be in a sticky situation.”