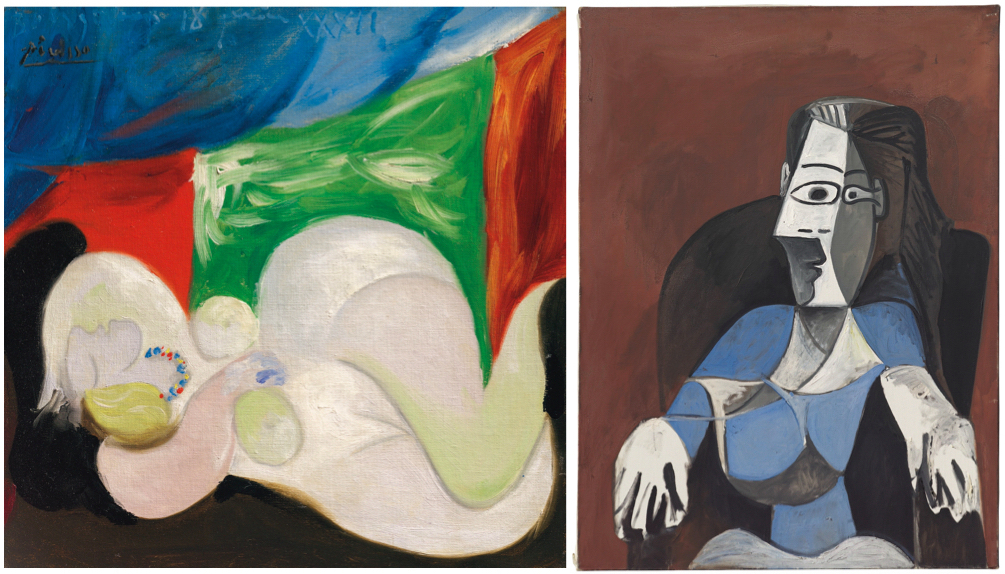 Still the most widely demanded artist across the world, Pablo Picasso is known for his depictions of several era-defining muses. Two women who feature most frequently in Picasso’s prolific output, representing a critical periods in the painter’s tumultuous private life, were his first mistress Marie-Thérèse Walter and his second and final wife, Jaqueline Roque.
Two paintings from the same private collection completed three decades apart, one depicting Walter and the other Roque—both tragic figures who died by suicide— will come to auction during Christie’s live-stream London-based 20th century art evening sale on March 23. Together, the two works, Femme nue couchée au collier (Marie-Thérèse), 1932, and Femme assise dans un fauteuil noir (Jacqueline), 1962, are expected to fetch a collective price between £15 million-£24 million ($20 million-$33 million).

“These two paintings encapsulate the defining iconography of these two great muses,” said Keith Gill, Christie’s Co-Head of the 20th century London evening sale in a statement. “Picasso’s career is often defined by the women who so powerfully shaped his artistic output, his feelings for his sitters igniting the canvas.”
1932 was a key year in Picasso’s career, when he made vibrantly colored paintings of a reclining, often sleeping Walter, examples of which reside in the Centre Pompidou, Paris, Musée Picasso, Paris and The Metropolitan Museum of Art, New York. By the early 1960s, Roque was the dominant subject in Picasso’s works. Showing her seated with a serious expression and a style widely changed from his 1930s works, Femme assise dans un fauteuil noir (Jacqueline) shows the muse “enthroned,” according to Christie’s statement describing the work, which adds, “The motif of a woman seated in an armchair was one of the artist’s abiding subjects.” It belongs to a series of seated portraits of Roque depicted in various guises.
The seller of the two works purchased them within a year of each other. The 1932 picture was acquired at a 2014  NewYork impressionist and modern art evening sale at Christie’s for $11.1 million; the 1962 work  was bought at Sotheby’s New York in 2015 for $8.1 million.