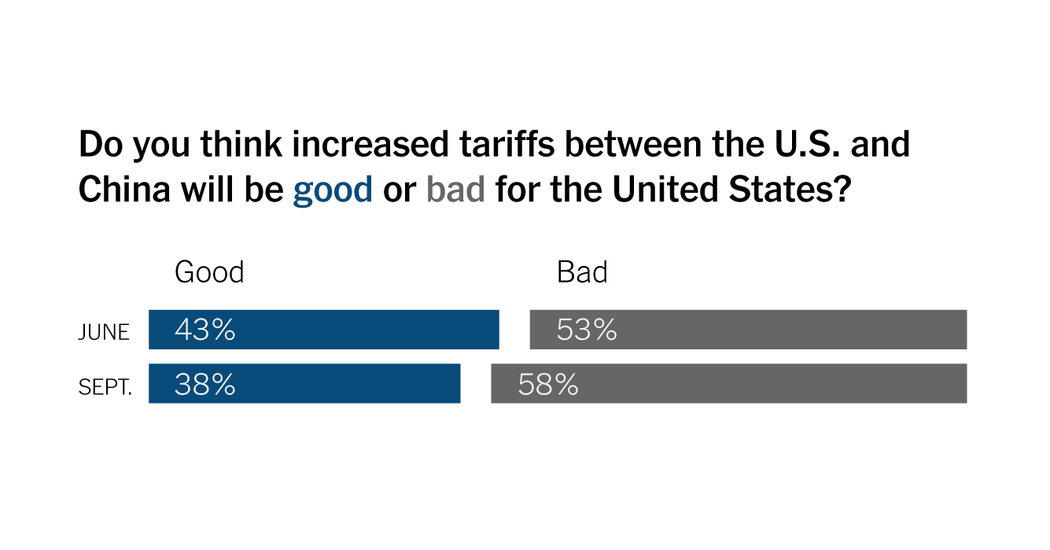 Mr. Wolff, 37, said the economy was doing well in his area now, thanks to the West Texas oil boom, but said he didn’t feel that Mr. Trump deserved much credit for that — and he thinks a recession is likely next year. He said he would consider voting for a Democrat in 2020, particularly if the nominee is one of the more moderate candidates, like former Vice President Joseph R. Biden Jr.But Democratic presidential candidates have struggled to articulate to voters exactly what they would do differently from Mr. Trump on trade. While Senator Elizabeth Warren of Massachusetts and former Representative Beto O’Rourke of Texas have released detailed trade agendas, most of the other candidates have been vague on their plans, besides general criticism of Mr. Trump and a vow to work more closely with allies. In a debate last week, several candidates said they would not roll back Mr. Trump’s China tariffs immediately.Bruce Friedman, a 67-year-old registered nurse in the Hudson Valley of New York, said tariffs were hurting farmers and consumers and were threatening the broader economy. He said Democrats should spend less time criticizing Mr. Trump and more time laying out their own plans.“If they talked about trade and things like that, they might get ahead,” Mr. Friedman said. “That’s what they need to talk about, is how they’re going to help the working people, the middle class.”But another survey respondent, Gustave Miracle, illustrated the delicate position facing Democrats. Mr. Miracle, a Catholic priest outside Boston, said he deeply opposed Mr. Trump’s immigration policies, but he appreciated his trade policies, which he saw as an effort to stand up for American workers.“I appreciated the fact that there was a lot of talk about the blue collar in America,” he said of Mr. Trump’s 2016 campaign.Mr. Miracle, 45, said he doubted that Mr. Trump’s policies would bring manufacturing jobs back to the United States. But he said it was worth trying.“It’s moral to have that fight, to stand for the American laborer, for the American average citizen,” he said.About the survey: The data in this article came from an online survey of 2,740 adults conducted by the polling firm SurveyMonkey from Sept. 2 to Sept. 8. The company selected respondents at random from the nearly three million people who take surveys on its platform each day. Responses were weighted to match the demographic profile of the population of the United States. The survey has a modeled error estimate (similar to a margin of error in a standard telephone poll) of plus or minus three percentage points, so differences of less than that amount are statistically insignificant.

A Preview of the Fed Meeting
Uber and Lyft Drivers Gain Labor Clout, With Help From an App
To Top
Top