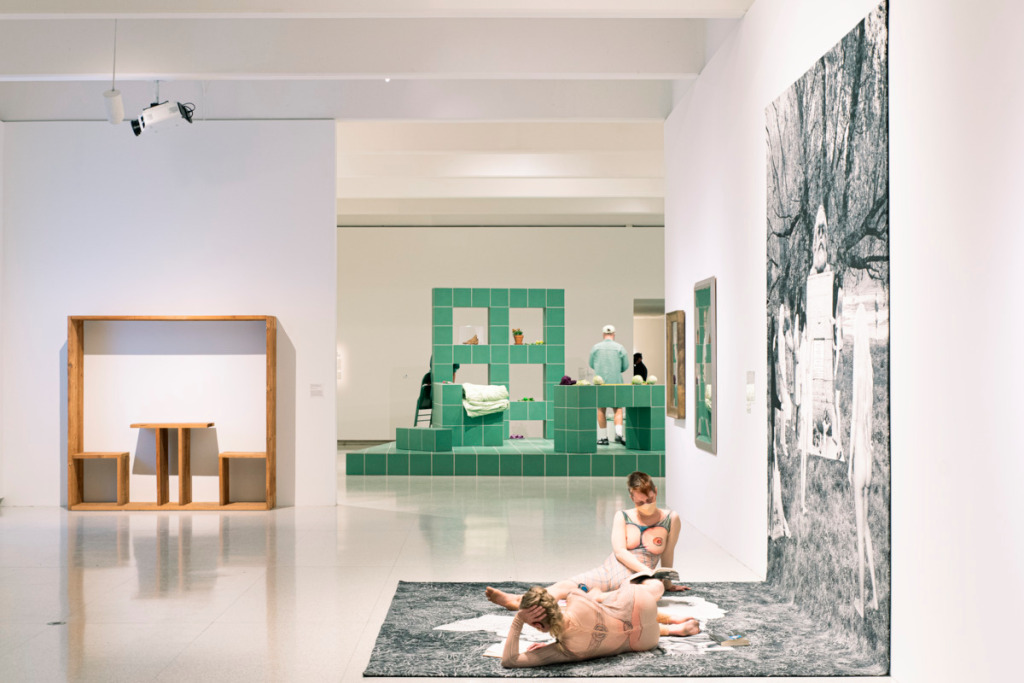 Describing her durational choreography in a 2017 interview for the Walker Art Center, Maria Hassabi observes, “I often talk about the paradox of stillness in my performances, because stillness can’t really exist—we are breathing, and even if it’s imperceptible, it’s still a movement.” Hassabi’s words provided the title for the museum’s current exhibition on the performative turn in the visual arts and the representational turn in performance—two overlapping trends that suggest a blurring of the animate and inanimate. Encompassing performance, painting, sculpture, photography, and video, “The Paradox of Stillness” examines how the defining characteristics of performance—time, space, embodied presence, and audience—have influenced the traditional visual arts. Inversely, the exhibition also proposes that performance draws strategies from painting and sculpture, including stillness, compositional framing, and representational tropes. The cross-media slippage is clearest in the galleries dedicated to still lifes and tableaux vivants. One gallery collects memento mori by Paul Kos, Pope.L, and David Hammons that sweat, rot, and melt. Elsewhere, documented choreography by Robert Morris and a tapestry that doubles as the backdrop for a performance by Goshka Macuga make explicit reference to the paintings of Édouard Manet—the latter critically represents the female nude, extracting images of women from the photographs of Miroslav Tichý and placing them in a feminist confrontation with the grave of Karl Marx.

“The Paradox of Stillness” is accompanied by a shifting schedule of performances that take place throughout the exhibition galleries and museum grounds. While bound to encounter one or two of the fourteen performances during any given visit, a viewer will also find many works inactive—Anthea Hamilton’s tiled platform reduced to architecture, Haegue Yang’s scintillating sound sculptures rendered silent. A strange kinship arises between these vacant stages and other works that invite the audience in, such as Piero Manzoni’s Base magica–Scultura vivente (Magic Base–Living Sculpture), 1961, which cues the viewer to stand on a wooden pedestal and become a work of art. In fact, the exhibition does little to distinguish between performance, documentation, stage, and indexical mark, each suggesting a different measure of liveness. Film documentation of Robert Morris’s Site (1964) is not the same beast as Marina Abramović’s performance for video Luminosity (1997)—the former was intended to be secondary to a work, the latter an experience itself. And Michelangelo Pistoletto’s sculpturally framed table and chairs Quadro da pranzo (Oggetti in meno) (Lunch Painting [Minus Objects]), 1965, suggests an opening for activation more like that of Yves Klein’s or David Hammons’s body prints than Cindy Sherman’s self-portrait in profile to which it has been spatially and conceptually linked. But clarity of terms is not a priority for this exhibition, which desires to further muddy the boundaries between disciplines, charting cycles of influence that have moved from the visual arts to performance and back.

We can also understand this show as an exploration of how to integrate performance into the traditional thematic group exhibition. As noted in curator Vincenzo de Bellis’s catalogue essay, new institutional platforms for the commission and display of performance have proliferated during the past ten years. But how do you insert the frequently narrative and durational aspects of performance into the space of the museum? Performance in a theater setting almost contractually demands the respectful attention and time of a viewer; the museum gallery model is almost exactly the opposite, giving over autonomy to the visitor’s itinerant gaze. De Bellis’s approach takes after that of Tate Modern curator Catherine Wood, who has remarked that, since the museum has traditionally been a space of representation, one answer to the quandary of exhibiting performance is to fit it into that language—and to put it in direct spatial dialogue with existing collections dominated by painting and sculpture. Indeed, it has been argued that the origins of performance art trace more directly to these media than to theater or dance, due in part to the modernist antipathy to theatricality voiced most infamously in Michael Fried’s 1967 essay “Art and Objecthood.” “The Paradox of Stillness” is pointed in its presentation of time-based performative works that deliberately respond to the visual arts. Ambitious as the show is, it also prompts us to consider modes of performance that do not fit comfortably into the white cube. I am reminded of choreographer Tere O’Connor’s comment about the Museum of Modern Art’s 2011 rendition of Anne Teresa De Keersmaeker’s Fase: Four Movements to the Music of Steve Reich (1982), for which the performance floor was coated in sand to leave an imprint of the dance: “That made me suicidal because how does dance depict? . . . Is it trying to make a symbol?” Not all performance is.