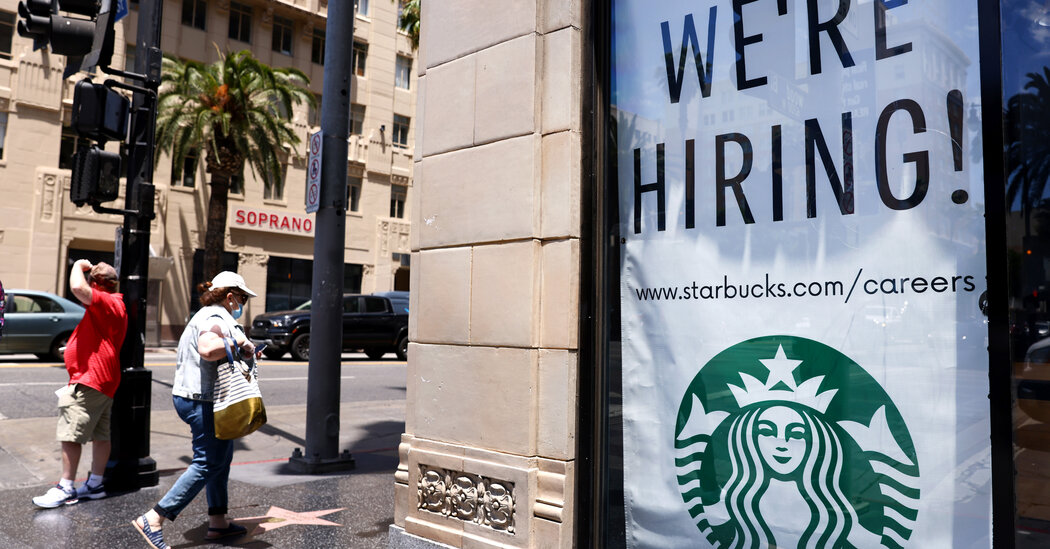 A slim majority of Americans say it is time for enhanced unemployment benefits to end.The federal government is providing jobless workers with $300 a week in benefits on top of their regular unemployment payments. Those benefits are set to last until September, although 26 states — all but one led by Republicans — have cut them off early or plan to do so in coming weeks.Critics, including many business owners and Republican politicians, argue that the extra benefits are discouraging people from looking for jobs and making it hard for businesses to find workers. Proponents, including progressive groups and many Democratic politicians, contend that the benefits are needed as the economy continues to heal and while pandemic-related risks remain.Republican arguments seem to be resonating with the public. Just over half of Americans — 52 percent — want the extra benefits to end immediately, according to a survey of 2,600 adults conducted this month for The New York Times by the online research firm Momentive, which was previously known as SurveyMonkey. Another 30 percent want the benefits to end in September as planned. Only 16 percent want the additional benefits to continue indefinitely.Views on the benefits are divided along partisan lines. Of Republicans, 80 percent want the extra benefits to end right away, compared with 27 percent of Democrats. But even among Democrats, most respondents don’t want the benefits to last past September.The survey also asked respondents who weren’t working what was keeping them off the job. Thirty-three percent said they were looking for jobs but “have not been able to find one that is worth taking,” and another 11 percent said they did not feel safe returning to work. Respondents volunteered a range of other explanations, including:“I don’t want to wear a mask and I don’t plan to be vaccinated.”“I am just recently fully vaccinated and will begin driving for Lyft again next week.”“Child care and no luck on job search.”“Age. Companies look at my age and pass.”“Car broke down and no money to fix it.”The survey included 65 respondents who said they were currently receiving unemployment benefits. Asked how they would behave if their benefits were cut off, 17 said they would still not return to work. Most of the rest said they would take a job that paid less than they wanted, made them feel unsafe or offered poor hours or working conditions.As of early June, some 3.5 million people were receiving benefits in states that plan to end some or all of the emergency programs early. A handful of states, including Alabama, Indiana and Missouri, have already cut off extra payments; more than 700,000 people were receiving benefits in those states as of early June.