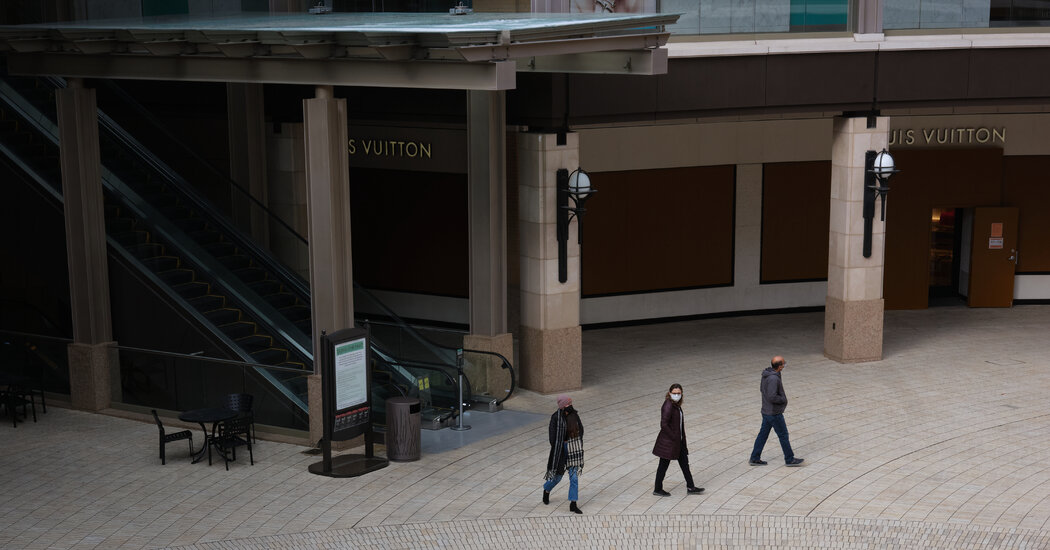 New claims for benefits continued to flood state unemployment offices last week as the coronavirus pandemic inflicted further economic damage.Initial claims declined to a new low from the stratospheric multimillion levels reached in the spring, but they remained above records set in previous recessions.While there is a “gradual healing of the labor market,” said Diane Swonk, chief economist at the accounting firm Grant Thornton, the number of laid-off and furloughed workers collecting some form of unemployment insurance is still staggeringly high.A total of 723,000 workers filed new claims for state benefits, the Labor Department reported Thursday. On a seasonally adjusted basis, the figure was 709,000.Another 298,000 new claims were filed under a federal emergency program, Pandemic Unemployment Assistance, designed for freelancers, part-time workers and others who are not normally eligible for state benefits.“Technically it looks like we’re in a recovery,” Ms. Swonk said, “but we’re still so much in the hole.”Prospects for digging out of that hole are shadowed by the alarming rise in Covid-19 caseloads around the country.And many people already collecting unemployment insurance have been hitting the 26-week limit on benefits that exists in most states.Those workers are eligible for an additional 13 weeks of benefits under a federal program called Pandemic Emergency Unemployment Compensation, though the transfer from one program to the other is not automatic in some states.The number of filings in this program increased to 4.14 million for the week ending Oct. 24, from 3.98 million the previous week, according to the latest data available. “That’s where you see the wounds festering and worry about how deep they are and how much they’ll scar us,” Ms. Swonk said.Most economists agree that controlling the pandemic is a prerequisite for an economic recovery regardless of any government-ordered shutdowns.News of the development of a vaccine that is 90 percent effective lifted hopes — and markets — this week. But Mary C. Daly, president of the Federal Reserve Bank of San Francisco, said on Tuesday, “The economy right now is being dictated by coronavirus’s existence, and I think less by the potential for a vaccine.”Several Fed officials, including the chair, Jerome H. Powell, have said Congress’s failure to agree on another relief package for individuals and business will hamper any recovery. Both federal pandemic-related jobless programs will expire at the end of the year without further action.With the coronavirus pandemic entering its ninth month, economists warn that the prolonged downturn could inflict long-lasting wounds to U.S. employment.“There’s a risk that we’re going to see permanent damage to the labor market,” said Rubeela Farooqi, chief U.S. economist for High Frequency Economics. She was referring to laid-off workers who end up dropping out of the work force and to industries like restaurants, entertainment, travel and hospitality that are unable to return to full capacity.Roughly one-third of unemployed workers have been without a job for 27 weeks or more, compared with 4.1 percent in April. The longer someone is unemployed, the harder it is to get back into the work force.There have been more job gains than losses recently, and the unemployment rate fell last month to 6.9 percent from 7.9 percent in September. But much of the progress was in dining and retail businesses, which are the most vulnerable to losses from rising coronavirus infections.Job losses that aren’t reflected in the unemployment figures also exact a toll.Cindy Fraser used to work three jobs: as a church custodian in Redford, Mich.; as a house cleaner; and as a florist specializing in weddings and special events.When the pandemic hit, her housecleaning and florist gigs dried up. She held on to her custodial job, working about 25 hours a week at $10 an hour. But she has struggled to keep up with her monthly bills, including a $650 mortgage payment, a $350 car payment, $150 for car insurance and $300 for utilities. She applied for Pandemic Unemployment Assistance, the federal program, but was told she did not qualify.Ms. Fraser, 54, is a single mother of four children and lives with her two younger daughters, 15 and 16, one of whom has a genetic condition and several autoimmune disorders that make her vulnerable to the coronavirus.Ms. Fraser has to be selective about taking additional work because she worries about exposure to the virus in a store or a restaurant.“I can’t get sick, because if either one of my daughters gets sick, I am the only parent to take care of them,” she said. “So I have to be extremely choosy as to what kind of jobs I can take so I don’t bring the virus into my home. I can’t just go get a job at Walmart.”To make ends meet, Ms. Fraser has been relying on the $2,000 a month in survivor benefits she has received since her husband died and has spent nearly all of her savings, about $5,000.“I had wanted to save that money for my daughters’ college tuition and driver’s training,” she said. “But now, it’s just going toward keeping a roof over their head.”