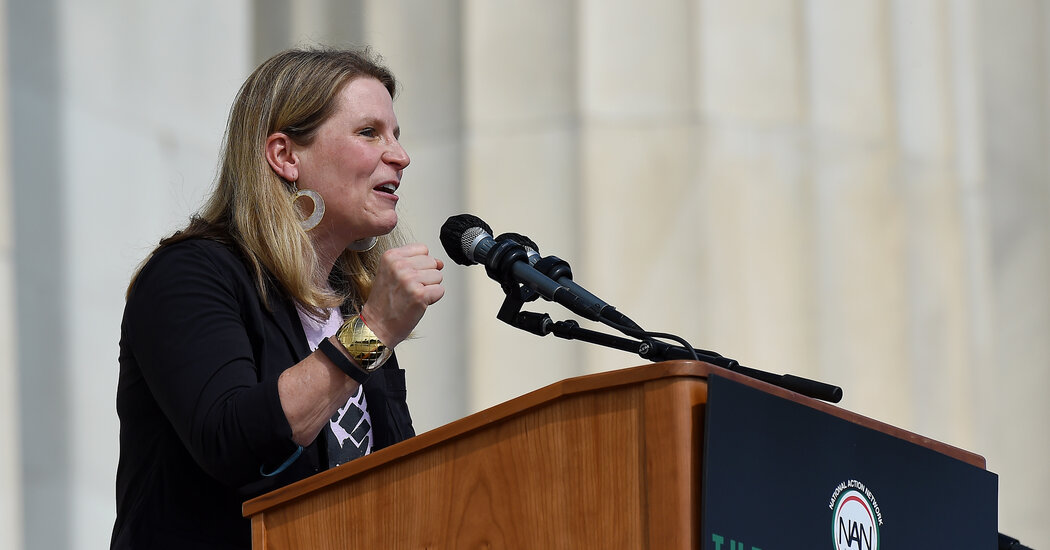 The A.F.L.-C.I.O. has chosen Liz Shuler, its acting president since the death of Richard Trumka this month, to lead the federation until it holds elections next year.Ms. Shuler had served as secretary-treasurer, the A.F.L.-C.I.O.’s second-ranking official, since 2009.The decision to name Ms. Shuler president came at a meeting of the A.F.L.-C.I.O. executive council on Friday, which Ms. Shuler was obligated to call within a few weeks of Mr. Trumka’s death under the federation’s constitution. Ms. Shuler is the group’s first female president.“I believe in my bones the labor movement is the single greatest organized force for progress,” Ms. Shuler said in a statement. “This is a moment for us to lead societal transformations — to leverage our power to bring women and people of color from the margins to the center — at work, in our unions and in our economy, and to be the center of gravity for incubating new ideas that will unleash unprecedented union growth.”Before becoming the federation’s secretary-treasurer, Ms. Shuler held a variety of roles with the International Brotherhood of Electrical Workers. She said in an interview the day after Mr. Trumka’s death that she had been preparing for years to lead the A.F.L.-C.I.O. and that she expected to be a candidate for a full four-year term next June.“You don’t just show up one day and ask for support — the groundwork has been laid for years,” she said. “I studied under the best, and I am ready to lead.”Union presidents and senior A.F.L.-C.I.O. staff members have spent years debating the proper role of the federation, with some arguing that it should mostly coordinate among its member unions and help advance their shared priorities in Washington and state legislatures. Others argue that the federation should play a leading role in organizing new workers and building alliances with progressive groups, like those promoting civil rights.Daily Business BriefingUpdated Aug. 20, 2021, 4:46 p.m. ETMr. Trumka, known for his close relationship with President Biden, was primarily associated with the first view during his later years as A.F.L.-C.I.O. president. Ms. Shuler is also identified with this approach, although she stressed in the interview that adding union members was a priority and has supported organizing initiatives in the past.Some officials who favor more emphasis on organizing want Sara Nelson, the president of the Association of Flight Attendants, to lead the federation.But few sought to challenge Ms. Shuler at a moment when the stakes are high for organized labor. The A.F.L.-C.I.O. is pushing for the large jobs and infrastructure measure proposed by Mr. Biden, as well as for legislation that would make it easier for workers to form unions.“There is a need to unify the labor movement to get where we need to go,” Ms. Shuler said in the interview. “My job would be to promote unity and solidarity around a common agenda.”The executive council also voted Friday to name Fred Redmond, a top official of the United Steelworkers, to fill the opening for secretary-treasurer that Ms. Shuler’s elevation created.Mr. Redmond, who is the first Black official to serve in one of the A.F.L.-C.I.O.’s top two positions, has been a vice president of the steelworkers’ union since 2005 and coordinates bargaining for members in the health care, pharmaceutical and shipbuilding industries, as well as those in the public sector. He also oversees the union’s civil rights department and has worked with other progressive groups to campaign for voting rights.The steelworkers’ president, Tom Conway, is close to Mr. Biden and has been outspoken in support of his jobs and infrastructure plans.

Huarong Asset Management, China’s Biggest ‘Bad Bank,’ Will Get a Rescue
Biden and the Fed Wanted a Hot Economy. There’s Risk of Getting Burned.
To Top
Top