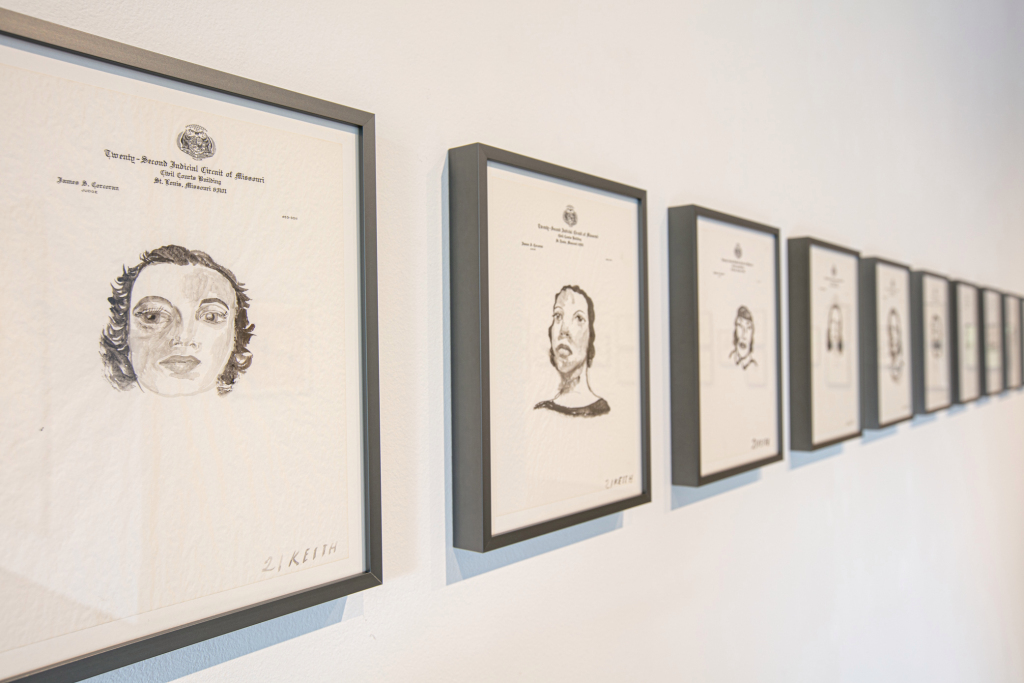 Of the fifty letter-size drawings of women’s faces in “I Live Alone,” only a few bear text. “Content,” states one, the letters articulating the neckline of a slightly dizzy visage. “Road Hard,” says another, the hair neat, mouth firm, and face sharply rendered. On each piece, Kit Keith has delicately applied small, watery strokes of black acrylic to dimpled onion skin stationery, a found material bearing the letterhead of a bygone Missouri circuit court judge as well as the official state seal and a St. Louis address. Produced daily over the course of three months, these direct, unlabored pieces feel diaristic; missives from the isolation of the pandemic, they also evince a mind familiar with self-assessment.

Who are these women? You know them but you don’t know them. Often styled after Louise Brooks (a Midwestern girl turned Hollywood icon whose fluid and unapologetic sexuality both catalyzed and compromised her career), they evoke 1930s headshots or yearbook photos—vehicles of dimly oppressive American archetypes that, in Keith’s hand, slip in and out of composure. Some faces look smeared or luridly cartoonish while others are nearly translucent, barely there. Never “perfect” in either the graphic or affective sense, the drawings still exhibit a singular gestural finesse in surveying the prototypical guise of normative sociality, under whose surface roils a range of rawer emotional states. One looks anxiously askance with a lopsided grimace. Another is fully coiffed but shown with her eyes closed—suggesting either a botched snapshot or a visitation-ready corpse. A third appears in a circular gray wash, perhaps a ghostly medallion for an aspirational winner. A further face, whose jaw seems amiss, almost dissolves under the impossible burden of putting on a suitable expression. Presented at eye level in a long stretch of frames, this vulnerable corpus tests the viewer’s gaze, both indexing and inviting appraisal.

Keith—white, female-identifying, bob-haired—resembles these women, versions of whom she’s been rendering for almost forty years. Why this compulsion toward veiled self-portraiture? As an artist whose career has been celebrated within the confines of the “local”—or, in other words, as an “outsider” to mainstream art culture—Keith has formed a body of work whose relation to her personal life has seemed largely out of her hands. A capsule version of her story goes like this: the youngest of four children, Keith was born to parents raised during the Depression—savers, scavengers, collectors. A few years later, Keith’s father, an itinerant sign painter, moved the family from Springfield, Illinois to Sarasota, Florida. There, Keith spent her early teens as a trapeze artist in the Ringling Bros. circus and worked alongside her father, restoring and painting signs. It was also in her late teens that Keith was diagnosed as bipolar, a condition she openly shares as having definitively shaped her life. After briefly studying at the Art Institute of Chicago during a period cut short by her illness, Keith moved to New York, where she and her then husband, a photographer, survived the thrills and ravages of bohemia for roughly a decade. She had solo shows at Ivan Karp’s legendary OK Harris gallery and Exit Art, and did a handful of illustration gigs for publications such as the New Yorker and the New York Times Book Review. She then had a son, settled in St. Louis, and got a divorce—a series of experiences intermittently punctuated by debilitating depressive episodes. Here in her adopted city, she found that she could better balance her mental health, art-making, and motherhood.

While the details of Keith’s personal narrative have been used to defend (the New York bona fides) or dismiss (the psychological ruptures, the return to the Midwest) the value of her art, they’ve rarely served an analytic purpose. Keith’s early apprenticeship in sign painting, familiarity with ’30s Americana, and formative years in the circus evidently led to the graphic quality, retro references, and performative nature of her work. The paradigmatic portrayals of “normal” females—they convey personal truths too. When their smiles waver or eyes twitch, when their faces, assumed to be at rest, instead convey grief, one glimpses the friction between physiology and decorum, as well as the graver systems of judgment that circumscribe women’s intimate and public fitness and agency. The circuit court’s stamp, which initially seems incidental, reinforces the sense that each diaristic drawing is an adjudication—by the self and by the powers that be, who can, say, disavow a transgressive starlet or confer or foreclose artistic legitimacy. While Keith’s work has frequently involved found, collaged elements amassed into intricate, eclectic shrines to unspecified losses, this exhibition strips down the means of her message to the most fundamental elements: the proverbial pen and paper, coupled with an irrepressible need. Recalling her lifelong practice of journal-writing, these paintings on paper, exhaustive and habitual in process, insist, I am here.