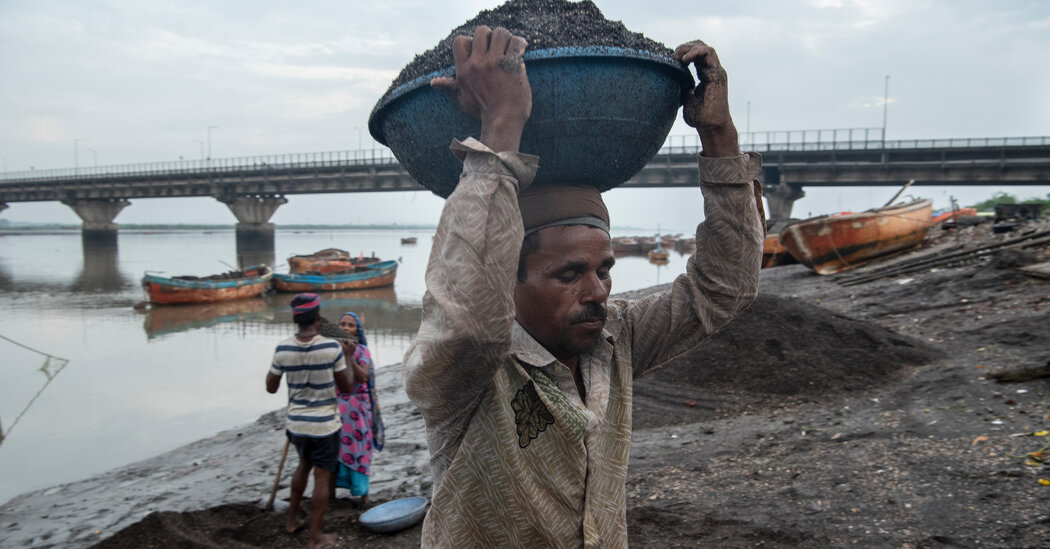 NEW DELHI — China has come roaring back from the devastation of Covid-19, and the United States, Europe and Japan are finding their feet. But the hundreds of millions of laborers and shopkeepers who keep India’s economy running still can’t find relief.India’s economy shrank 7.5 percent in the three months that ended in September compared with a year earlier, government figures showed on Friday. The data reflects the deepening of India’s severest recession since at least 1996, when the country first began publishing its gross domestic product numbers.The new figures firmly ensconced India’s position among the world’s worst-performing major economies, despite expansive government spending designed to rescue the thousands of small businesses severely battered by its long, hastily imposed lockdown. Nikhil Das, a 62-year-old manufacturer of silk ties and scarves in New Delhi, says his business is teetering on the edge of collapse. His sales, which depend on demand from luxury shops and airport retailers, have fallen by four-fifths. He needs payments from customers to make up for his manufacturing costs, but retailers who can’t move his wares still owe him more than $50,000.He has idled six workers he once paid for each tie and scarf they made, and he has been treated for stomach pain that his doctor has attributed to stress.“The money supply chain is broken,” Mr. Das said. “It is a constant source of tension to me.”The Indian government has committed $50 billion, roughly 2 percent of India’s annual economic output, to help small businesses, as well as cash transfers to low-income workers as part of a $266 billion economic package. For the average Indian worker and entrepreneur, it hasn’t been enough. An estimated 140 million people lost their jobs after India locked down its economy in March to stop the outbreak, while many others saw their salaries drastically reduced, the Mumbai-based Center for Monitoring Indian Economy said. As the lockdown was eased, many went back to work, but more than six million people who lost jobs haven’t found new employment.In a June survey by the All India Manufacturers Organization, about one-third of small and medium-sized enterprises indicated that their businesses were beyond saving. The industry group said that such a “mass destruction of business” was unprecedented.Businesses like Mr. Das’s form the backbone of India’s still-developing economy. Small and medium-size enterprises employ about four-fifths of the labor force.India’s textile factories, leather tanneries, brick kilns, foundries and other small enterprises form “part of the country’s social fabric, bringing local wealth and local employment,” said Venkatachalam Anbumozhi, an economist who focuses on South and East Asia.Just a few years ago, India, with a population of 1.3 billion people, was one of the world’s fastest-growing large economies. It regularly clocked growth of 8 percent or more. Global businesses began to warm to the idea of India as a potential substitute to China, both as a place to make goods and to sell them. China’s costs are rising, and its trade war with the United States has complicated doing business there. The Chinese Communist Party is increasingly intruding into business matters, and local Chinese competitors have upped their game against international brands. But India’s economy was facing headwinds well before the pandemic. Between April and December 2019, G.D.P. grew only 4.6 percent.“India was expected to really step into China’s shoes and give that additional boost to globalization that was missing,” said Priyanka Kishore, head of South Asia at Oxford Economics. “And that’s where India didn’t really play out the role it was largely expected to play, and that role seems to be diminishing more and more.” Since coming to power in 2014, Prime Minister Narendra Modi has shaken the economy with policies meant to boost government revenues and help India’s transition to digital banking. Some of the efforts have been embraced by business, such as Mr. Modi’s pledges to slash the country’s vast and tangled web of red tape. But other Modi initiatives meant to bring India’s informal, off-the-books economy into the open proved disruptive for many small businesses, which don’t have the resources that big companies can deploy to overhaul how they make payments and keep their books. One of Mr. Modi’s policies, called demonetization, banned large currency notes overnight in an effort to crack down on tax avoidance and money laundering. Under another, India replaced its welter of national and state taxes with a single value-added tax, in part to cut down on corruption among tax collectors. Mr. Modi also increasingly turned India’s industrial policy inward, which many economists say has hurt overall growth. The country has long nurtured some of the steepest trade barriers of any major economy, to help its domestic industries develop. Mr. Modi added to that in areas like electronics. His government has also tightened rules around e-commerce, to assist Indian businesses that compete with companies like Amazon and Wal-Mart. “The slowdown,” said Ms. Kishore, “is almost homegrown.” That stumbling economy was dealt a sharp shock by the coronavirus. The near-total nationwide lockdown in March brought the economy to a halt, instantly stripping many Indians who rely on daily wages of any prospect of earning money. Millions of workers who over the years had been drawn to India’s urban centers for jobs started returning home to rural areas. The economic problems are by no means over. Officials desperate to stimulate business lifted some of the lockdown restrictions, allowing more movement — and further spreading the coronavirus. The country is recording a sharp decline in infections from a September high, but experts fear it is only a lull.Even after the pandemic wanes, Ms. Kishore projects, India will be the worst-affected among the world’s major economies. Debt-laden companies will have to borrow even more. Growth could fall to 4.5 percent annually over the next five years, well below the 6.5 percent growth that had been projected before Covid-19.“The worst,” said Dr. Anbumozhi, the economist, citing the potential impact to small business in particular, “is yet to come for India.”Hari Kumar contributed reporting.

James D. Wolfensohn, Who Led the World Bank for 10 Years, Dies at 86
‘Tokenized’: Inside Black Workers’ Struggles at Coinbase
To Top
Top