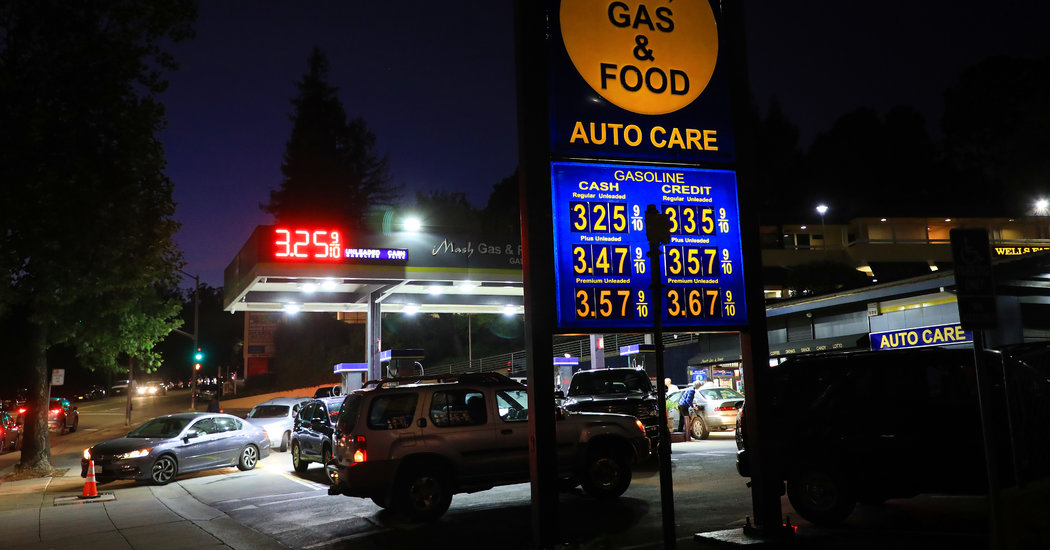 For months, American consumers have kept the economy humming. While businesses pulled back, shoppers continued to spend.But a prolonged surge in gasoline prices after the attacks on oil production facilities in Saudi Arabia could undermine that phenomenon and increase the risk of a recession.“It’s clearly not a positive, and it adds a negative to the outlook,” said Steve Blitz, chief United States economist at T.S. Lombard, an independent research firm. “It’s another straw on the camel’s back.”Monday’s nearly 15 percent spike in oil prices to $62.90 a barrel isn’t big enough to bring on a recession — it only returns crude prices to where they were this spring. And the economy expanded from 2011 to 2014 even when prices were above $100 a barrel.Monday’s jump is expected to add roughly 20 cents to gas prices, which now average $2.56 a gallon nationally, said Tom Kloza, global head of energy analysis for the Oil Price Information Service. Those higher prices should be in place by the end of the month, he said.He estimates that the typical American family uses 90 gallons of gasoline every month, which means they would spend an extra $18 a month as a result of the attacks on Saudi Arabia.[Read more: Oil markets are on edge after the attack on Saudi facilities.]But a shock in the form of a rapid $20 or $30 a barrel jump in oil prices would have a bigger economic impact.“At that level, the consumer takes a significant hit,” said Ethan Harris, head of global economics and research at Bank of America Merrill Lynch.A $25 a barrel increase in oil prices, the kind of move analysts cite as a potential threat to the economy, would add 50 cents to the cost of each gallon of gas. That would mean an extra $45 in monthly spending for the typical family.The Federal Reserve will be keeping a close eye on energy prices as policymakers meet in Washington on Tuesday and Wednesday. Most observers expect the Fed to reduce interest rates a quarter-point.Worries about growth have been building over the last six weeks. If consumer spending faded, the economy wouldn’t have much to fall back on.An important measure of manufacturing published this month showed that factory activity had contracted two months in a row. And in the second quarter, business and residential investment fell.The financial markets have been shaky, and short-term bond yields have exceeded returns on longer-termed notes, a sign a recession could lie ahead.Through all of that, consumers have appeared to be in fine shape. Retail sales rose 0.4 percent in August, after a 0.8 percent jump in July, the government reported Friday. Demand for automobiles, sporting goods and building materials all showed strength.And the University of Michigan reported Friday that its preliminary September reading for consumer confidence stood at 92, a bit better than expected and an improvement from August.[Saudi Arabia’s new energy minister is taking over in a crisis.]Changes in energy prices can cause broader economic swings, including when prices drop sharply. A plunge in oil prices from $106 a barrel in June 2014 to $30 in February 2016 dealt a blow to manufacturing as demand for oil-related products fell and, in turn, slowed overall economic growth.The effect of higher oil prices on businesses is complicated because oil’s role in the economy has changed since the energy shocks of the 1970s. Buoyed by oil production from shale deposits in Texas, New Mexico and other states, America has slashed imports and has become a major exporter of oil and gas.Higher prices would help not only oil companies but also steel producers, which have become major suppliers of metal pipe and other goods to the energy industry. They’d most likely see a pickup in demand as drilling activity increased, offsetting some of the damage a spike would cause to consumer spending.But other businesses, particularly those in the transportation sector, could suffer. Companies, including airlines and delivery firms that rely on cheap fuel to make money distributing packages for online retailers, could be big losers if oil prices soar.“Shale has shifted the paradigm,” said Gregory Daco, chief United States economist at Oxford Economics. “On the one hand, with higher prices there is a hit to consumers. But there’s an incentive for oil and gas companies to invest and produce more to reap the benefits.”The biggest risk to consumers — and the economy itself — would be a significant military conflict between the United States and Iran. Businesses, already cautious about spending, would pull back further. Consumers would likewise retreat.“When these things happen, people stay home and watch the news,” said Mr. Blitz of T.S. Lombard. “You’d see a dip in spending at the mall.”

Fed Intervenes in Market to Set its Interest Rate, a First Since the Financial Crisis
The Fed Is Poised to Cut Rates Again. Here’s What to Watch.
To Top
Top