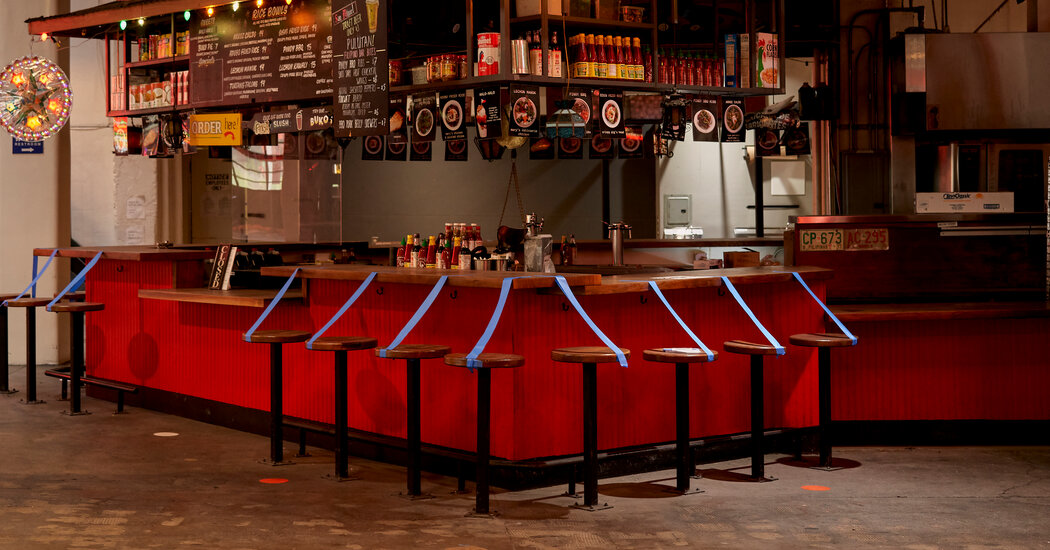 After a pandemic-induced spike in layoffs amid new restrictions in many states, unemployment claims are falling, helped by a drop in new coronavirus cases.Initial claims for unemployment benefits declined last week, the Labor Department reported Thursday, and were significantly below the level in most of December and early January.New coronavirus cases have fallen by a third from the level of two weeks ago, prompting states like California and New York to relax curbs on indoor dining and other activities. That, in turn, has provided something of a respite for workers in the hardest-hit industries.Last week brought 813,000 new claims for state benefits, compared with 850,000 the previous week. Adjusted for seasonal variations, last week’s figure was 793,000, a decrease of 19,000.There were 335,000 new claims for Pandemic Unemployment Assistance, a federally funded program for part-time workers, the self-employed and others ordinarily ineligible for jobless benefits. That total, which was not seasonally adjusted, was down from 369,000 the week before.While claims remain extraordinarily high by historical standards, the improvement has raised hopes that layoffs will continue to slow as vaccinations spread and employers shift from shedding workers to adding them.“We’re stuck at this very high level of claims, but activity is picking up,” said Julia Pollak, a labor economist with ZipRecruiter, an online employment marketplace. Indeed, job postings at ZipRecruiter stand at 11.3 million, close to the 11.4 million level before the pandemic hit.The improving pandemic situation has eased the strain on restaurants and bars, Ms. Pollak added. But with a deficit of almost 10 million jobs since the pandemic struck, and employers still cautious about hiring, the economy faces broad challenges.Jerome H. Powell, the Federal Reserve chair, told the Economic Club of New York on Wednesday that policymakers should stay focused on restoring full employment, “given the number of people who have lost their jobs and the likelihood that some will struggle to find work in the postpandemic economy.”He noted that employment had dropped just 4 percent for workers earning high wages but “a staggering 17 percent” for the bottom quartile of earners.Updated Feb. 12, 2021, 5:04 a.m. ETPlenty of other signs of weakness remain. The Labor Department reported that employers added just 49,000 jobs in January, underscoring the challenges for those out of work.President Biden cited the weak showing to press for approval of a $1.9 trillion pandemic relief package. It would send $1,400 to many Americans, provide aid to states and cities and extend unemployment benefits that are due to expire for millions in mid-March.The House Ways and Means Committee took an initial step on Wednesday when it began work advancing a measure that would continue emergency benefits through late August and increase a weekly benefit supplement to $400 from $300.With the prospect of additional relief and a decline in virus cases, some experts say a strong rebound is possible this year. Oxford Economics is predicting that the economy will grow 5.9 percent in 2021, compared with a contraction of 3.5 percent last year.Employers are already putting out the welcome mat in certain fields, according to economists from ZipRecruiter and another large online job site, Indeed.Ms. Pollak said employer postings at ZipRecruiter in recent days offered hope. “We’ve seen employers smash all of our expectations and show a great deal of exuberance,” she said. “There are clear differences between different industries.”Besides the strength in industries that benefit from the stay-at-home trend, like warehousing and deliveries, hiring in tech and professional and business services has been showing signs of life recently.“Businesses are looking to the future and are somewhat optimistic,” Ms. Pollak said.AnnElizabeth Konkel, economist at the Indeed Hiring Lab, added that demand for pharmacists was up 23 percent from a year ago, while openings for drivers had jumped 18 percent. “It all ties directly back to the pandemic,” Ms. Konkel said.Nevertheless, there have been regional differences. In cities where many people are working remotely, like Washington, Seattle, Boston and San Francisco, there have been fewer postings in some fields than in places where more workers are back in the office.“People aren’t popping into their local coffee shop on their way to work or stopping into a store to pick something up when they work at home,” Ms. Konkel said, and that affects hiring.Openings at restaurants are down from a year ago, she added, as are positions in arts and entertainment, hospitality, and tourism.At ZipRecruiter, the energy industry has increased job postings after steep losses early in the pandemic. Manufacturing, too, has recorded more openings lately.“Some of the losers are finally coming backing a bit,” Ms. Pollak said. “But so many industries can’t possibly resume while the pandemic is going on.”

Bidenomics 101: Inside the White House’s Plans to Bring Jobs Back
Pizza Was the Restaurant Hero of 2020
To Top
Top