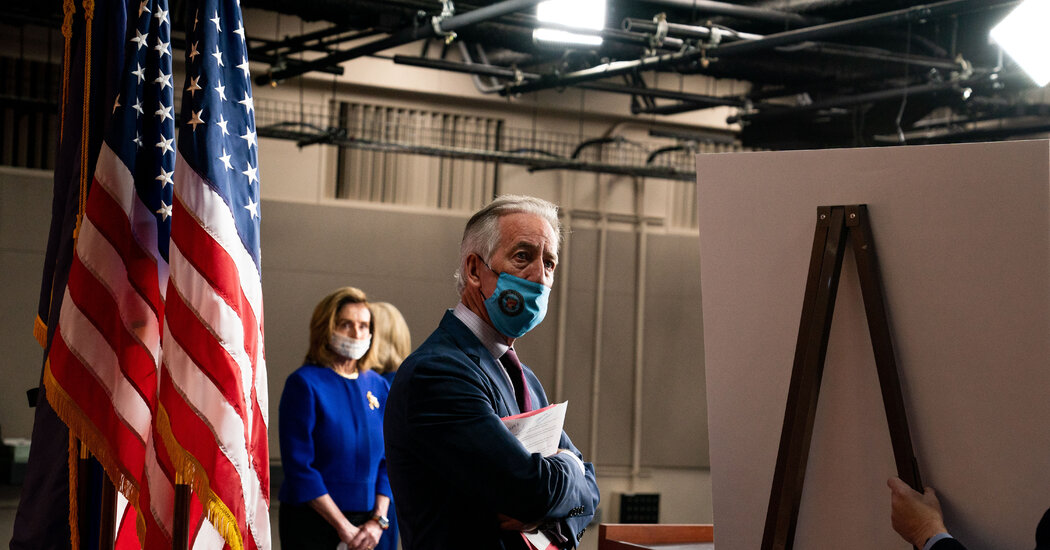 WASHINGTON —  Top House Democrats are preparing to unveil legislation that would send up to $3,600 per child to millions of Americans, as lawmakers aim to change the tax code to target child poverty rates as part of President Biden’s sweeping $1.9 trillion stimulus package.The proposal would expand the child tax credit to provide $3,600 per child younger than 6 and $3,000 per child up to 17 over the course of a year, phasing out the payments for Americans who make more than $75,000 and couples who make more than $150,000. The draft 22-page provision, reported earlier by The Washington Post and obtained by The New York Times, is expected to be formally introduced on Monday as lawmakers race to fill out the contours of Mr. Biden’s stimulus plan.“The pandemic is driving families deeper and deeper into poverty, and it’s devastating,” said Representative Richard E. Neal of Massachusetts, the chairman of the Ways and Means Committee and one of the champions of the provision. “This money is going to be the difference in a roof over someone’s head or food on their table. This is how the tax code is supposed to work for those who need it most.”The credits would be split into monthly payments from the Internal Revenue Service beginning in July, based on a person’s or family’s income in 2020. Although the proposed credit is only for a year, some Democrats said they would fight to make it permanent, a sweeping move that could reshape efforts to fight child poverty in America.The one-year credit appears likely to garner enough support to be included in the stimulus package, but it will also have to clear a series of tough parliamentary hurdles because of the procedural maneuvers Democrats are using to muscle the stimulus package through, potentially without Republican support.With House Democratic leadership aiming to have the stimulus legislation approved on the chamber floor by the end of the month, Congress moved last week to fast-track Mr. Biden’s stimulus plan even as details of the legislation are still being worked out. Buoyed by support from Democrats in both chambers and a lackluster January jobs report, Mr. Biden has warned that he plans to move ahead with his plan whether or not Republicans support it.Republicans, who have accused Mr. Biden of abandoning promises of bipartisanship and raised concerns about the nation’s debt, have largely balked at his plan because of its size and scope after Congress approved trillions of dollars in economic relief in 2020.Updated Feb. 8, 2021, 3:48 p.m. ETBut the child tax credit could provide an opportunity for some bipartisan support, since Senator Mitt Romney, Republican of Utah, introduced a similar measure that would send payments of up to $1,250 per month to families with children. Mr. Romney’s proposal, intended to encourage Americans to have more children while reducing child poverty rates, would distribute payments through the Social Security Administration and offset costs by eliminating other government safety net spending.“If you’re President Biden, and you’re serious about having a bipartisan — working together with people on the other side, bringing people together in unity, he has the opportunity to do it,” Senator Patrick J. Toomey, Republican of Pennsylvania, said on CNN’s “State of the Union.” (Mr. Toomey has said he would not support Mr. Biden’s proposal because of the price tag.)Janet L. Yellen, the Treasury secretary, warned on Sunday that the United States labor market was stalling and in a “deep hole” that could take years to emerge from if lawmakers did not quickly pass the stimulus package.Ms. Yellen rebutted concerns that big spending would lead to inflation and said the economy would face the kind of long, slow recovery that it experienced after the 2008 financial crisis if lawmakers did too little.“The most important risk is that we leave workers and communities scarred by the pandemic and the economic toll that it’s taken,” Ms. Yellen said on CNN. “We have to make sure this doesn’t take a permanent toll on their lives.”Ms. Yellen said that passing the stimulus package could allow the economy to reach full employment by next year. Failing to do so, she said, could leave the jobless rate elevated for years to come.The provision expanding the child tax credit is among the legislative proposals intended to address the inequities exacerbated by the pandemic and help families weather the nation’s faltering economy. Researchers at Columbia University found that Mr. Biden’s overall stimulus proposal could cut child poverty in half in 2021 because of the expansion of the child credit, as well as other changes to tax credits and expansions of unemployment and food assistance benefits.“The moment is here to make dramatic cuts in child poverty that could improve the lives and the future of millions of children,” Representative Rosa DeLauro, Democrat of Connecticut and the chairwoman of the House Appropriations Committee, said on Sunday. She said she would push to make the credit permanent.Chris Cameron and Jim Tankersley contributed reporting.