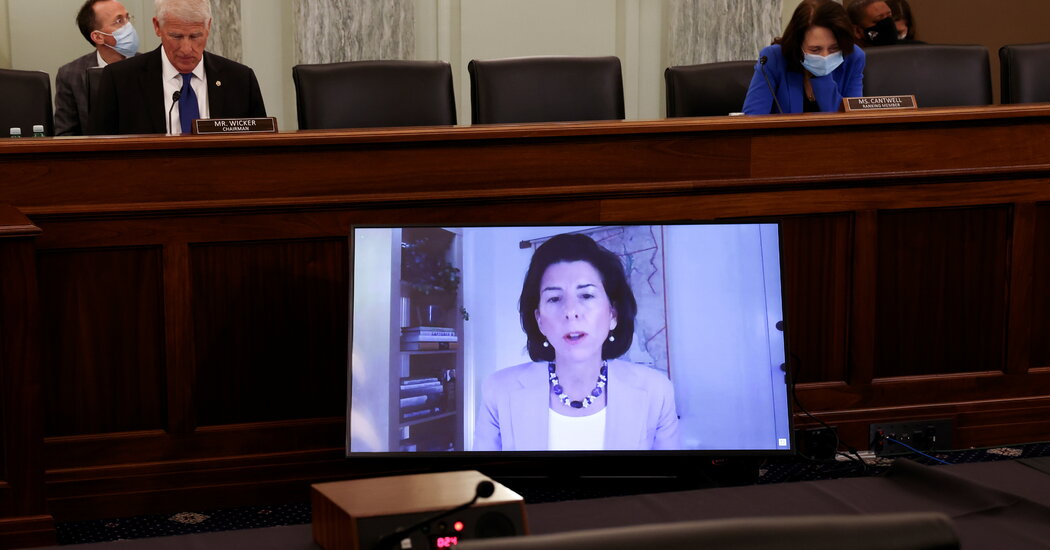 WASHINGTON — Gina M. Raimondo, President Biden’s nominee to be the next commerce secretary, told lawmakers on Tuesday that she planned to help American communities bounce back from coronavirus, aggressively enforce trade rules to combat unfair Chinese practices and leverage the government’s power to mitigate climate change if confirmed.Ms. Raimondo, the current governor of Rhode Island and a former venture capitalist, tried to reassure members of the Senate Commerce Committee that she would work with them on priorities like protecting American fisheries, expanding broadband access and promoting American research into cutting-edge technologies like artificial intelligence and advanced communications.“In this time of overlapping crises, the Commerce Department must be a partner to businesses and workers to help them innovate and grow,” Ms. Raimondo said.The Commerce Department has become increasingly powerful in recent years, given its wide-ranging authority over technology exports, climate change and other issues. Sometimes described as the government’s hall closet, the sprawling department is also responsible for enforcing trade rules, monitoring the weather and carrying out the census.The Trump administration made heavy use of the department’s authorities to crack down on Chinese technology firms, turning often to the so-called entity list, which allows the United States to block companies from selling American products and technology to certain foreign firms without first obtaining a license. Dozens of companies have been added to the Commerce Department’s list, including telecom giants like Huawei and ZTE, which many American lawmakers see as threats to national security.While lawmakers from both parties have flagged some Chinese companies as national security risks, Ms. Raimondo declined to commit to keeping Huawei or other Chinese firms on the entity list when pressed to do so by Senator Ted Cruz, Republican of Texas. She vowed to use the powers of the Commerce Department “to protect Americans and our network from Chinese interference,” adding, “that’s Huawei, ZTE, or any other company.”The Biden administration is facing pressure from industry to relax some of the tight controls imposed on China by the Trump administration. On Monday, a semiconductor manufacturing group sent a letter to Ms. Raimondo urging her to review export controls that they said were harming the industry, and to impose multilateral controls in concert with allies instead.Ms. Raimondo called China’s actions “anti-competitive, hurtful to American workers and businesses” and said the country was “culpable for atrocious human rights abuses.”But her reluctance to explicitly commit to keeping certain Chinese companies on the entity list drew a sharp rebuke from some Republicans, including Mr. Cruz.“There’s chatter in Washington that the Biden administration is contemplating going easy on China and removing companies from the entities list,” Mr. Cruz said during the hearing. “I certainly hope that does not happen because I think that would be profoundly contrary to the national security interest of the United States.”The New WashingtonUpdated Jan. 26, 2021, 2:54 p.m. ETIn a tweet on Tuesday, Representative Michael McCaul, Republican of Texas, said removing Huawei from the entity list would be a mistake, given the company’s links to the Chinese military and the threat it poses to American security.“It’s remarkable and frankly disturbing that Ms. Raimondo can’t commit to keeping #Huawei on the Entity List,” he said. “I strongly urge her to reconsider.”Ms. Raimondo also appeared to walk a careful line on the steel and aluminum tariffs that President Donald J. Trump levied on foreign countries, including many in Europe.She declined to say whether the Biden administration would remove or change the metal tariffs, instead committing it to carrying out a broad review of trade policies in consultation with its allies and pursuing uncompetitive trade behavior from China. She also pledged to ensure that the process that allows certain companies to avoid the steel and aluminum tariffs — which faced criticism during the Trump administration for being complicated and arbitrary — was swift, fair and objective.In a sign of how broad a portfolio she would be overseeing, Ms. Raimondo vowed to focus on a wide range of other issues, including promoting the country’s capacity in advanced technologies like artificial intelligence, blockchain and 5G telecommunications, and making broadband access, particularly in rural areas and tribal lands, “a very top priority the minute I get into the job.”She described internet access as a “necessity” in the pandemic, pointing to how it allows children to take online classes, patients to visit with their doctors and people to sign up to receive the coronavirus vaccine.“It’s not a luxury good,” she said. “Everybody deserves access to broadband.”Several senators praised her combination of public and private sector experience, saying those skills could help the country deal with economic damage from the pandemic, increase investment in American workers and business, and promote the marine and space economies, which the Commerce Department also oversees.Ms. Raimondo said that her background as a state official and a venture capitalist before that had prepared her to help realize the department’s mission. She talked about the effects of offshoring and factory closures on her family in the 1980s, when her father lost his job at a local watch factory and was forced into early retirement.During the hearing, Ms. Raimondo focused on her role in bringing down Rhode Island’s unemployment rate, once the highest in the nation, crediting work force training and small business lending programs that she helped initiate. Rhode Island’s unemployment rate sat at 6.6 percent when Ms. Raimondo took office as governor in 2015. It then fell fairly steadily to a low of 3.4 percent at the beginning of 2020, mirroring a broader trend around the United States. The jobless rate has since spiked in the wake of the pandemic, and in November it sat at 7.3 percent, the 12th highest of any state in the nation.