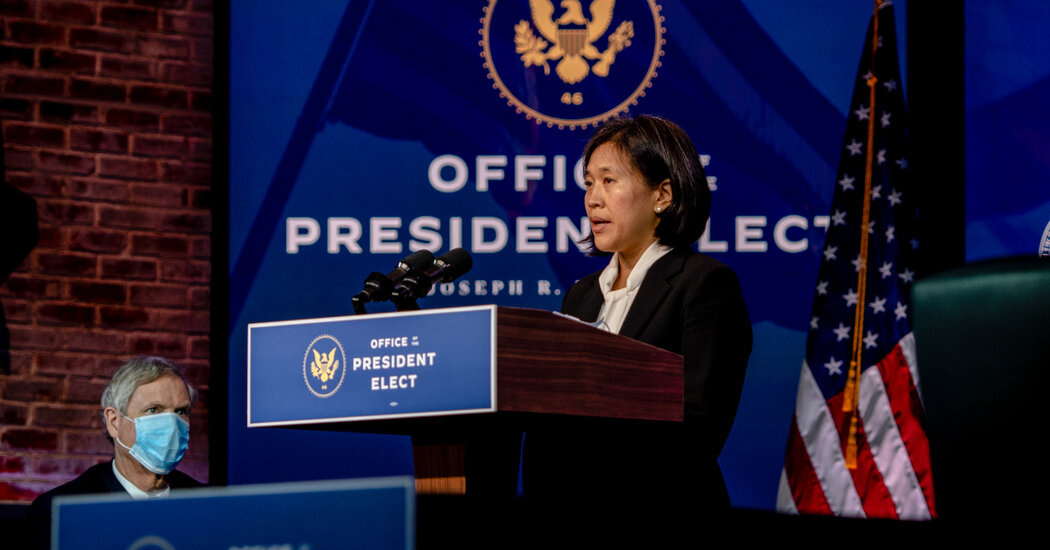 The team will also have to decide what to do about the legacy of higher trade barriers and large tariffs on a variety of foreign products, including goods from China, left behind by President Donald J. Trump. Mr. Biden has said his administration is still reviewing the effects of those tariffs and other trade policies issued by Mr. Trump. But on Feb. 1, Mr. Biden reinstated tariffs on aluminum from the United Arab Emirates, a move that pleased unions but disappointed industries that have argued that the tariffs raise costs.Several of the appointees worked closely with Katherine Tai, the Biden administration’s nominee for United States trade representative, on revising the new North American trade deal, which was negotiated by the Trump administration and replaced NAFTA last year.That includes Nora Todd, a former adviser for Senator Sherrod Brown of Ohio, who will serve as chief of staff, and Greta Peisch, a former counsel to Senator Ron Wyden of Oregon, who has been appointed general counsel. Shantanu Tata, a former adviser to Representative Suzan DelBene of Washington, will serve as executive secretary and adviser, and Samuel Negatu, a former legislative director for Representative Jimmy Gomez of California, will serve as director of congressional affairs.Other appointments include Sirat K. Attapit, who previously worked for Attorney General Xavier Becerra of California, as assistant U.S. trade representative for intergovernmental affairs, and Adam Hodge, a former Obama administration official, as assistant trade representative for media and public affairs. Jan Beukelman, a staff member for Senator Thomas R. Carper of Delaware, will serve as assistant U.S. trade representative for congressional affairs, while Jamila Thompson, who served on the staff of Representative John Lewis of Georgia, will be senior adviser.The administration also named Brad Setser, an Obama administration Treasury official, as counselor to the U.S. trade representative. Mr. Setser has written extensively on the role of both currency and taxation in trade, suggesting that the new administration could take a more expansive view on changing tax and currency policy to boost American exports and benefit workers.