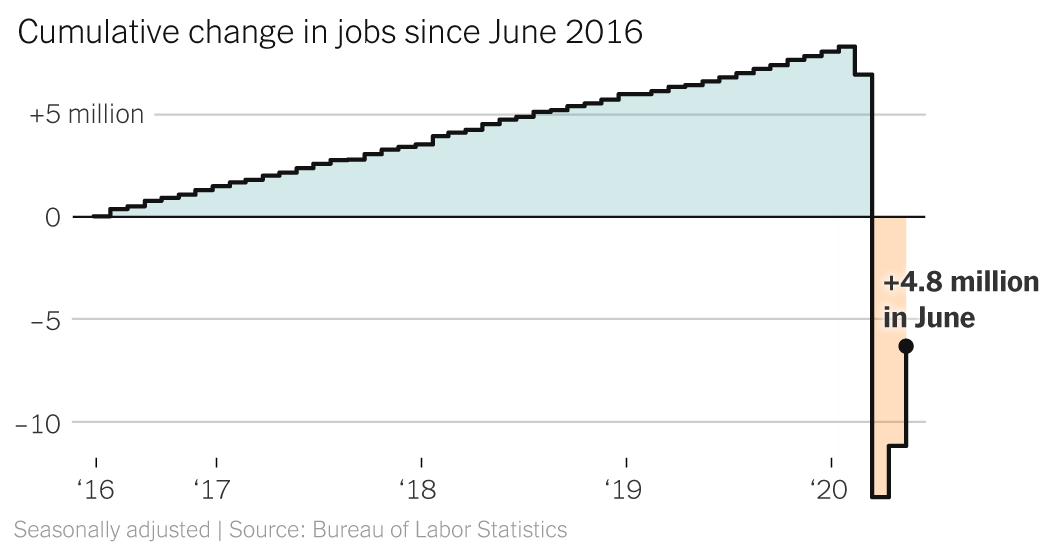 “I think we would be really hesitant,” he said. “Staying shut we understood, but reopening and reshutting is just wrong.”Economists say stories like Mr. Terzian’s drive home a central fact of the crisis: The economy can’t truly begin to recover until the pandemic is under control. “The virus drives the economics,” said Betsey Stevenson, a member of the Council of Economic Advisers under President Barack Obama who is now at the University of Michigan. If cases continue to rise, as health officials warn, “we’re not going to have people going back to work,” Ms. Stevenson added.“In fact, we’re going to see more people staying home,” she said.Total employment has grown the past two months because companies have begun recalling temporarily laid-off workers. But layoffs have continued as the economic effects of the pandemic ripple through the economy, reaching businesses and industries that were spared earlier.The number of people reporting they had permanently lost their jobs rose in June even as the number of workers on temporary layoff fell sharply for the second consecutive month. And the share of Americans out of a job for 14 weeks or less fell in June, while the share unemployed longer continued to rise — another sign that while short-term job losses are abating, more enduring damage lingers.“We’re going on four months now,” said Olugbenga Ajilore, a senior economist at the Center for American Progress, a progressive group. “There’s only so long that these businesses can hold out before it just doesn’t become feasible.”The rebound in jobs has not been shared equally across groups. The unemployment rate for white workers has fallen more than four percentage points over the past two months, to 10.1 percent. For Black workers, the rate has fallen just over one point, to 15.4 percent, and the rate for Black men actually rose in June. Asian workers, too, have seen only small gains. Latinos, hit particularly hard when the pandemic shut down much of the service sector, have had a larger drop in unemployment but their jobless rate remains elevated at 14.5 percent.

Congress Extends Small-Business Loan Program for 5 Weeks
How You Get Your Berries: Migrant Workers Who Fear Virus, but Toil On
To Top
Top